How Charles Dickens and a Cowboy Inspired a Fantasy

When you boil it down to its core, a cowboy and Charles Dickens inspired a new fantasy/science fictional story. Here is the long and winding road to a new work.

I am a prodigal son when it comes to science fiction and fantasy in the written format. As a child, I read SF almost exclusively (Hardy Boys and The Three Investigators were the exceptions). Somewhere along the line, I dropped almost all SF except Star Wars and Star Trek books and dropped fantasy altogether. After awhile, even Star Wars and Star Trek books ceased to capture my attention. Thus, two formative genres I grew up with vanished from my To Be Read pile.

It was an interesting trip back on the path. Harry Potter certainly helped. In the spring of 2007, I ‘caught up’ and read the first six books in a row. Thus, I, like the entire world, breathlessly read the seventh and final volume together. Great story, but, still, I wasn’t really on the literary SF/F path. I was in the underbrush. I could see it but I didn’t really have a desire to claw my way back to the path. I was on another pathway (crime fiction) and it was all-consuming. That’s all I read and that’s all I wrote. Nothing else mattered.

It wasn’t until the spring of 2009 when I firmly planted my feet back on the genre pathway I grew up with. The reasons are threefold. One, I read Dan Simmons’ Hyperion (here's my review). We talk about sense of wonder and there was a recent blog post asking the question if sense of wonder is really code for the returning to childhood. Some of it is undoubtedly true. However, as an adult, I read Hyperion and that sense of wonder returned in a huge rush to my brain. I think it actually expanded a bit. Isn’t that one of the reasons we read SF/F anyway?

The second factor is Charles Dickens. Ever since I reviewed a book about his writing of A Christmas Carol, Dickens has been present somewhere all the time. There was Dan Simmons’ newest novel, Drood, where he evoked the mysterious last five years of Dickens’ life through the eyes of his fellow writer, Wilkie Collins. (My review here.) Next, PBS presented the fantastic BBC production of “Little Dorrit.” (My initial takes here and here and here) I began to study now Dickens created his stories, their interlocking plotlines, and he inspired me as he’s done countless other authors. I wanted to write a Dickens-type story.

So, how did a western, Charles Dickens, and Hyperion inspire a renewed interest in science fiction and fantasy? Well, it came about because of the main character in the short story. You see, Calvin Carter is hunting down the man who killed his father. Calvin thinks his father was collateral damage in a train robbery. With the twisty logic of a Dickens novel swirling in my head, I asked one question: What if the killer told Calvin that his father was the real target of the train robbery. That, naturally, led me to asking a second “why” question: what was the killer after? One thing led to another and a science fiction story was born. It's now spawned a fantasy story.

And it’s so much fun. The possibilities, the wonder, the new dangers… It’s intoxicating. And I now have the genesis of a new story. I’m looking forward to see where it goes.

A note to any readers out there who read “You Don’t Get Three Mistakes” and liked it. Calvin Carter is not going to be a part of this story. He is the inspiration, yes, but I want him to stay firmly in the real world as I spin new yarns for him to follow.
at April 27, 2009 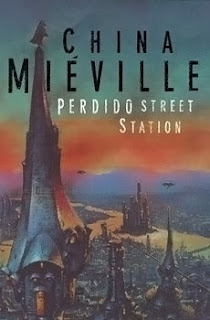